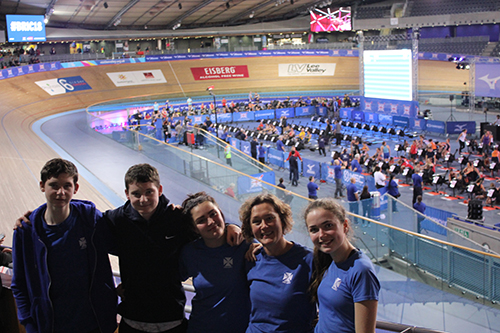 These five were thirteen year olds Bradley and Lewis Perry-French, fifteen year olds Heidi White and Poppy Webb and master rower, Liz Taylor.
All competing against world athletes and rowers their own age from schools and clubs from around the country.

This is what they have all been training hard for for the past few months and was their first time to compete in such a renowned and important
competition like this.

Liz, who has rowed since she was 14 years old was up first, rowing 2000 meters in the Masters 50 to 54 women’s category. There was extremely
hard competition in this category and Liz, who manages to keep up with the other youngsters in the Bay club, got a well earned 5th place. She said “That was bloody hard, I knew it would be, but I’m glad I did it!”

Poppy and Heidi were up next, to row against 59 other rowers for six minutes where Heidi came 13th and Poppy came 18th overall. Both came back
exhausted, but still buzzing from the adrenaline and excitement of being a part of this major rowing event.

Later on in the day the girls entered the 500 meter race, this time against 33 girls from year 11. Heidi was “really pleased” with her 5th
place and Poppy did well to get to 13th place.

Twins, Bradley and Lewis were ones to watch in their competition, as they always work so hard in their training sessions. Both boys started
off strong and fast in the beginning of their five minute race, but started to tire, but should still be very proud at getting joint 20th and Bradley at joint 24th out of a whopping 83 competitors!

Their 500 meter race in the afternoon had a bit of a different result, where Lewis came 16th in 1 minute 36 seconds and Bradley coming in at
18th place only 1.2 seconds later.

With 86 events taking place throughout the whole day from 9am until 6.30pm with extreme professionalism and speed, the whole day was a joy
to watch and be a part of.

All who came to the event had a chance to watch a few Olympic rowers compete against each other. In the women’s 2000 meter race Alice Baatz,
25 year old GB Rowing Team member, achieved an incredible 06.44 result, beating the other ladies.

I managed to catch the friendly and bubbly Alice for a five minute chat, to ask her what her secret was with diet before a race and her top
tips were eat small and often. “I don’t eat two hours before a race, but if I have to I eat a few sweets to keep the sugar levels up, and caffeine bars are my friend on race day.”

The men’s Olympic team were up, featuring Mo Sbihi, who beat Adam Neill by just one second and getting sub 6 minutes on his 2k test with 05.41!
Something all young rowers will aspire to beat now I’m sure!

Coming to this event and experiencing something as big and well-known as this was very exciting and inspiring for the teenagers and also for
the responsible adults that joined them. All five of the competitors should be extremely proud of themselves for taking part in this star-studded event.

Everyone is looking forward to entering themselves into next year’s competition already. Now the hard work starts, especially as we know what
to aspire to.

If there is anyone who wants to aspire to be a great rower, we are training over the winter ready for next year and always looking for new members to join
this competitive club. Contact us for more information.